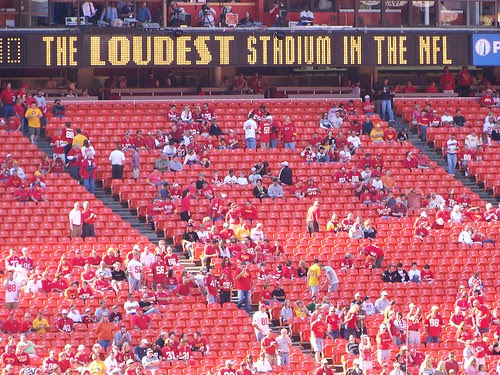 Ahhh...the Chiefs game. Where to begin???

I managed to get home from work in the morning, changed into jeans and a Chiefs shirt. I took my vitamins and fought the urge to just lie down and snooze for a minute. I went over to Mom's house, where the others arrived, and we set off for our day's adventure.

But not until we stopped by Starbucks for something caffeine-charged. Starbucks was insanely busy with other people who were going to the game. In true fashion, they fooked up my beverage, but at that point, I didn't care. I drank it anyway and was grateful for it. Some cities don't even have a Starbucks.

Across from Starbucks, sat a very busy McDonalds with a flurry of activity. I don't know what, but three cop cars pulled up, and one officer jumped out of his car packing an AK or whatever assault rifle sponsored by the Independence PD. A couple minutes later, he walked, dejected, back to his car. There would be no gun play today.

From there, drove to the stadium and found our tailgating party. Because I had been awake for a while, I was in full-on crab mode. Realizing I forgot my hat, I went to one of the little tents that sold Chiefs crap and bought another hat. I'm sure I paid too much for it, but I didn't care. I had a new hat, and I was happy for the time being. 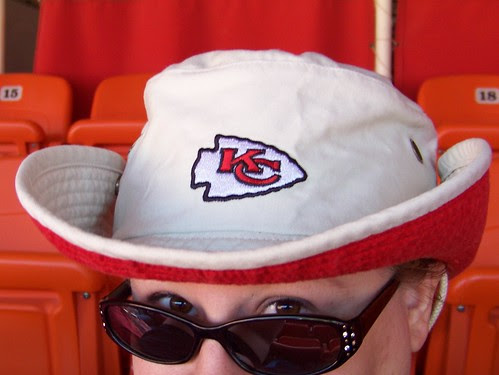 I love hats the way some women love shoes. Even if I do look like a Make-a-Wish kid when I wear them.

Light tailgating ensues by our group and we enter the stadium. Our seats are out of the sun, which defeated the need for the hat. 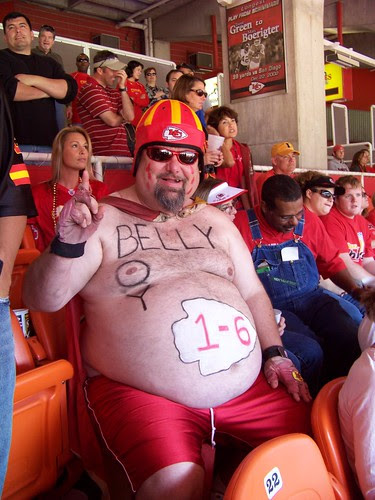 At least Belly Guy didn't have to worry about getting a sunburn. (I wonder how much lint that belly button can hold?)

Apparently, it was Armed Services Day at Arrowhead, and they had a bunch of guys in their uniforms. Pre-game, they walked around the stadium, which was cool because people would go down to the field and shake their hands as they walked by. In the parking lot, I witnessed strangers approaching these military folks just to tell them thanks. 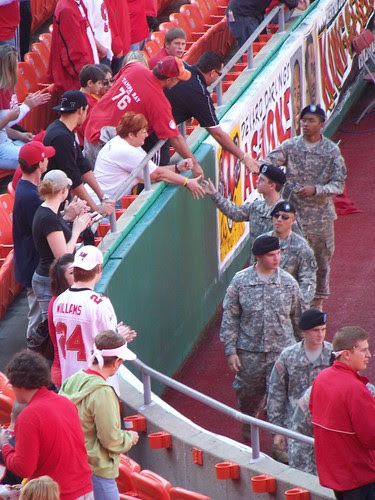 That's the sort of thing that makes me proud of my fellow Americans. However, during halftime, they had a group of new recruits take their oath. So, while they are standing on field, hands raised, reciting the oaths that set the course of their lives, which may or may not end in the ultimate sacrifice, some asshole Chiefs players are practicing their throws and kicks. Would it really have been that much of a hassle to not do that while these kids were taking their oaths??? I mean, I understand that you need to warm up because you're million dollar job could hang in the balance, but it was rude to do it while some 18 year old was standing right there taking an oath to die for your douche nozzle ass if that is what was required. 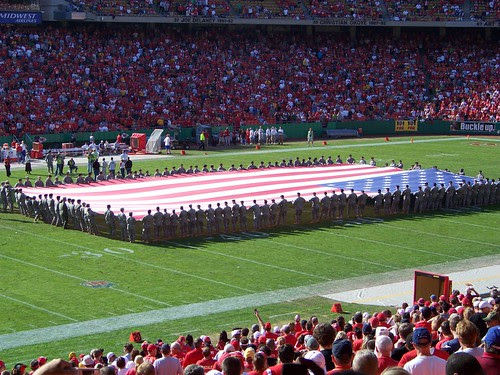 I have half a mind to write to someone and bitch about it.

I'm willing to guess that this is when Karma decides to show up and crap on the team for the second half. Serves them right.

The Chiefs Cheerleaders wore something to get into the spirit of the day. 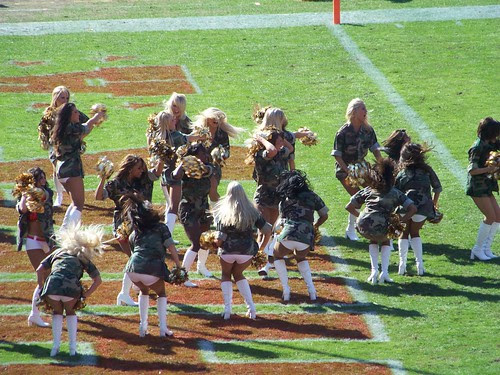 It didn't help their dancing. Here, they all try to fart to the music. I just assumed this because of the smell. 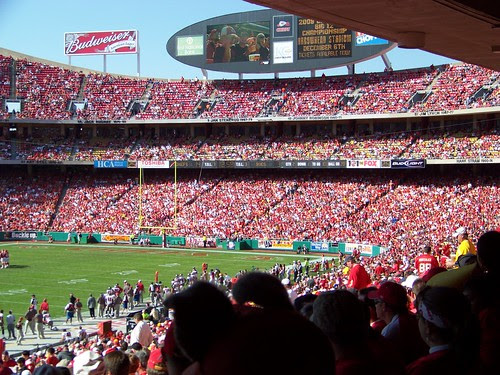 At the beginning of the game, the Chiefs actually looked like an NFL team. The crowd, burned a million times over by this team, actually got excited because it really did seem like we'd actually win a second game this year. Then, of course, Herm Edwards decided to use the junior varsity squad of some random high school for the second half, and the team blew a big lead, losing in sudden-death overtime by a field goal. Way to go, dumbasses.

I bought a big pretzel for myself and Mom. They were $4 each, and apparently left over from last season. I couldn't even eat half of the shriveled up thing. I contemplated sending a message to that Chiefs hotline they have set up when fans have a concern or complaint while in the stadium.

The section we were in featured many regular season ticket holders. The two guys in front of us had apparently been sitting there since Arrowhead was first built. Everyone seemed to know them, and they really were nice. They truly did have team spirit, even though the Chiefs reside in a constant vortex of suck.

However, there was a woman who sat behind us that screeched like a pterodactyl. So much, that our ears were ringing. It was horrible, and I wanted to turn around and punch her in the throat if it meant shutting her up. It was almost as bad as that lady who "sings" for the Chiefs band.

Anyway, the Chiefs, in keeping with their time-honored tradition in showing that only a Dyson can suck harder, lost the game. Shocking. Everyone leaves the stadium, some cursing Herm Edwards as they did so. 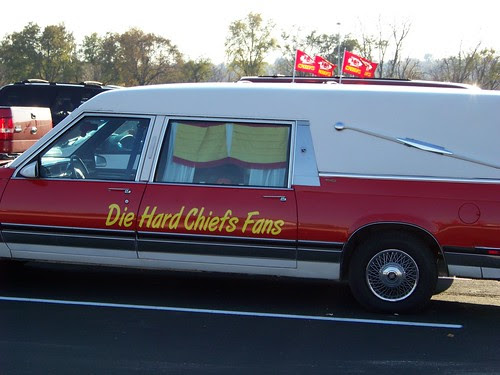 And the Chiefs players go home in theirs... 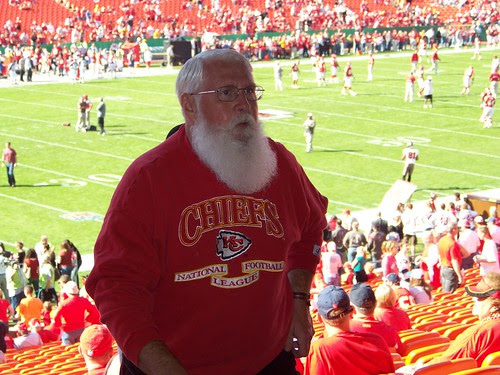 Santa goes back to the North Pole to try to work on getting the team a new coach and general manager for Christmas. Maybe even a new defensive line.

After we finally extracted ourselves from the traffic, we went home. We had dinner at Fuddruckers, and I came home and went to bed. Awake from 4pm Saturday, finally going to be at 7:30 pm Sunday night. EXHAUSTED.

The day wasn't a complete wash, though. I got a new hat. AND...and day that I get to see Elvis is an automatic good day. 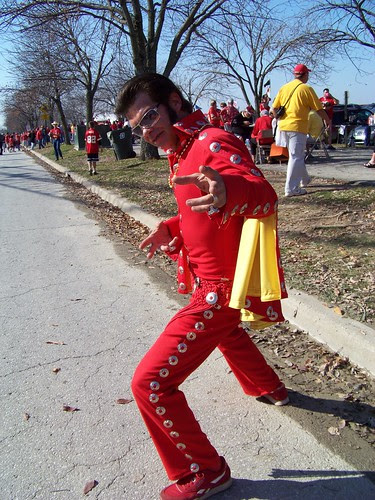 Watched the whole game at my GF's folks place. That first half even the little kids were cheering! Second half we had to send em outside because of all the swearing.

As for hats, I used to buy a new hat after every loosing season and throw the old one out. Except it got depressing, So I saved the last one I liked. Don't have a boonie hat tho, looks practical AND comfy!

Gah! That pic of belly boy ruined my appetite for the day.

The Boonie hat is the official hat of General Blather.

The belly guy looks like he has that lady's head on a stick/his finger. I was kinda confused for a minute.

Your Nurse for the Evening

GB, RN
Anything can be a suppository if enough force is applied.

Train Wrecks (Out of Towners)

Sites To Visit While Waiting for the Next Code